The City of Goleta is pleased to announce that its July 30, 2022 Beautify Goleta Community Cleanup Event was another huge success! Five community cleanup sites were attended by 80 volunteers who collected 734 pounds of trash to keep it from polluting our neighborhoods, streams, and oceans. In addition to the trash collected, the Fairview/Kellogg Neighborhood Spotlight Bulky Item Depot also collected 7,967 pounds of furniture, mattresses, and other items! Check out KEYT’s coverage of the event on line.

We are very grateful and proud of our volunteers and neighborhood captains for taking the time and energy to participate in this event. A special thank you to Elks Lodge #613 for hosting our Neighborhood Spotlight, which included a bulky item pickup in addition to a volunteer community cleanup. Thanks also to Big Green and MarBorg for their continued support of Beautify Goleta events, and to Caltrans and Clean California for their support of the collection of bulky items at Elks Lodge.

Here are the results from each cleanup site:

Neighborhood Spotlight – Fairview/Kellogg
30 volunteers picked up a total of 219 pounds of trash in the Fairview/Kellogg neighborhood! Additionally, an additional 7,966 pounds of bulky waste was dropped off by nearby residents, or 8,185 pounds of total waste collected for this site! Thanks to Elks Lodge for providing parking, and thanks to our special guest, Captain, Board Member and Founder of Beautify Goleta, Roger Aceves.

Girsh Park
15 volunteers, including returning captains and volunteers from the Goleta Evening Rotary Club, picked up a total of 174 pounds of trash! Special thanks to the Rotary Goleta Evening Club for their hard work and support at every Beautify Goleta event this year. We are so lucky to have such a dedicated organization as a Beautify Goleta partner!

Evergreen Acres
Our cleanup at Evergreen Acres Park was led by Susan Klein-Rothschild. Susan has been an amazing volunteer for Beautify Goleta, and it was great to have her captain there. Thanks to Susan and 11 volunteers, 33 pounds of trash were removed from the park and surrounding neighborhoods!

Ellwood Cliffs
We were blessed with two amazing captains for our second round of Ellwood Bluffs – Chris Briones of Okeanos Swimwear and Jennifer Smith. Chris and Jennifer, along with 9 volunteers, picked up 128 pounds of trash! Thank you to our returning captains for helping organize and lead this cleanup.

The City is grateful to all the volunteers who came out on Saturday to help spruce up Goleta. If you weren’t able to participate in this event, you can still participate in future events! We will soon have an announcement on how we will participate in Brook Week. Keep an eye out for press releases and we’ll let you know when you can help #BeautifyGoleta next! For more information, visit https://cityofgoleta.org/beautifygoleta.

A special thank you to all of our Beautify Goleta volunteers! 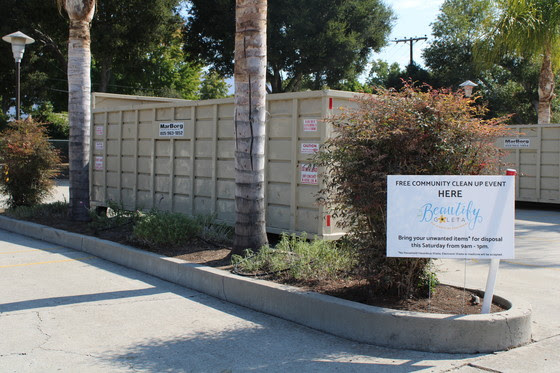 MarBorg Roll off Container ready for bulky items from Goleta residents. Thanks to MarBorg, Big Green, CalTrans and Clean California for their support in helping residents get rid of their bulky trash.

18 hours ago Stephanie B. Bull