The yen is the big winner today on massive safe-haven inflows, which also pushed Treasuries higher. The cryptocurrency crash has intensified further as bitcoin barely holds 25,000. Major European indices are in deep red while US futures, especially NASDAQ, point to a lower open . Benchmark Treasury yields extend, with the US 10-year yield back to 2.83 while the German 10-year yield is back to 0.85.

Back in the currency markets, the dollar follows the yen as the second strongest. Aussie is the worst performer so far. But the euro’s sell-off deserves more mention, despite hawkish comments from ECB officials. The weakness in the euro is somewhat amplified by the sell-off against the British pound and the Swiss franc.

Technically, AUD/JPY’s drop from 95.73 extends to 87.94 so far today. The break of short-term declining channel support suggests downward acceleration. The break of the 100% projection from 95.73 to 90.41 from 94.00 to 88.68 also increases the possibility that 95.73 is already a medium-term top. The next line of defense is the resistance at 86.24 turned support. A firm break there will argue that it is already correcting the entire uptrend from the 2020 low at 59.85 already. Such a development, if it occurs, could be reflected in global equities and even bond markets. 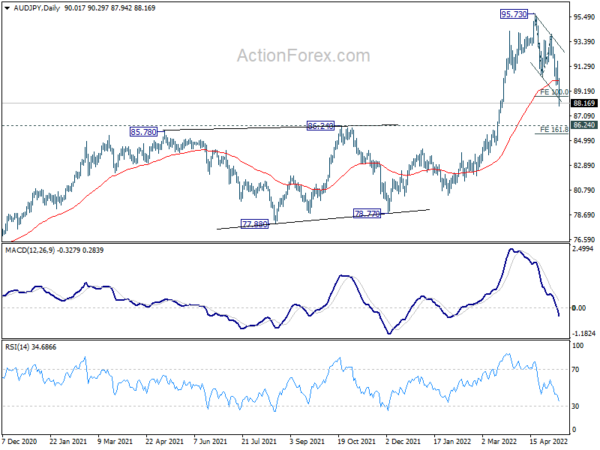 ECB Makhlouf: The era of negative rates is coming to an end

ECB Governing Council member Gabriel Makhlouf said today that the ECB has reached the point of “acting”. And, “the balance of benefits has tipped decisively towards the need for further action, but not necessarily at a pace similar to that of other central banks.”

“Our target is for inflation to be 2% over the medium term – levels are well above that now, and it is time for the Board to decide to end net asset purchases under the purchase program assets next month or July,” he said. mentioned.

Makhlouf added that it is “realistic to expect the ECB’s first interest rate move to occur shortly after net asset purchases end and rates are likely to be in positive territory. early next year.” But he did not specify when the rate hike would occur.

“The era of negative rates is coming to an end,” he said.

BoE Deputy Governor Dave Ramsden told Bloomberg that a stronger-than-expected labor market could push inflation to 7% to 10% before the end of the year. “Given what we know about the UK labor market, I wouldn’t be surprised if it turned out to be a bit tighter,” he said. “I think there are upside risks to inflation over the medium term.”

“Admittedly, based on my current assessment of the outlook, we are not there yet in terms of the degree of monetary policy tightening,” he said. “I’m still very, very supportive of the expectation of further tightening in the coming months.”

June “will be a time to take stock – in this extraordinary time, we are really learning things every day,” he said. “I don’t think we’ve gone far enough on the discount rate yet, but I think what we’ve already done is having an impact.”

In the summary of advice from the April 27-28 meeting, the BoJ noted that “As Japan is a commodity importer, rising commodity prices are causing an outflow of revenue from Japan and thus putting pressure on the downturn in the economy. And, “it is necessary for the Bank to continue the current powerful monetary easing and thus firmly support the economy”

A notice noted that “one of the reasons for the recent depreciation of the yen is that economic conditions in Japan have been different from those in the United States and Europe, and it is not appropriate for the Bank to change its policy for the purpose of controlling exchange rates.”

“In order to clarify the Bank’s position to date not to accept the long-term interest rate above 0.25% and to avoid a situation where day-to-day operations are unnecessarily factored into the market, it agrees that the Bank announces in advance that it will make purchase transactions at the fixed rate of 0.25% each business day, unless it is highly probable that no offer will be submitted.

EUR/USD finally breaks through 1.0470 support today as the downtrend resumes. Intraday bias is back to the downside with focus on long term support at 1.0339. The firm break will have more bearish implication there and will target a 161.8% projection from 1.1494 to 1.0805 from 1.1184 to 1.0069. On the upside, a break of the 1.0641 resistance is needed to signal a near term bottom. Otherwise, the outlook will remain bearish in the event of a rally. 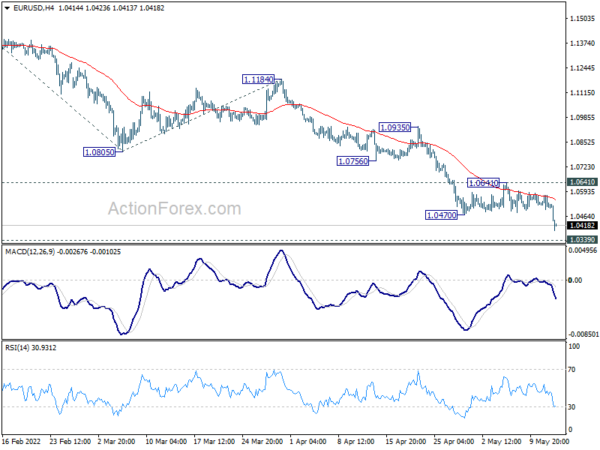 Overall, the breakout of medium-term channel support suggests downward acceleration. The current decline from 1.2348 (2021 high) likely resumes the long-term downtrend from 1.6039 (2008 high). A retest of the 1.0339 low (2017 low) should be seen next. A decisive break there will confirm this bearish case. This will now remain the preferred case as long as 1.0805 support becomes resistance. 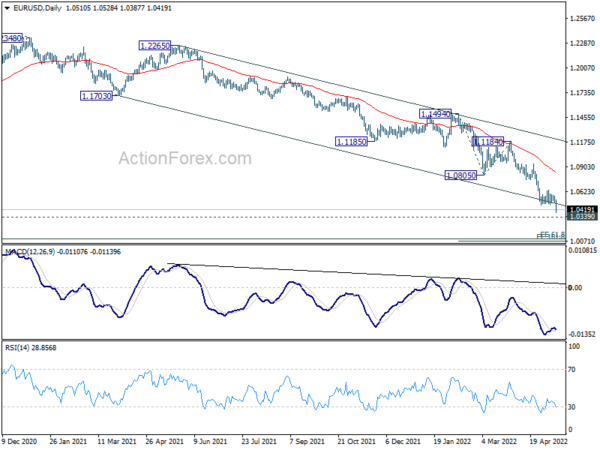 Forex, the flexibility of interest rates necessary for the development of the market: Atiur Rahman

1 day ago Stephanie B. Bull

The Rise of Investable Utilities

Forex, the flexibility of interest rates necessary for the development of the market: Atiur Rahman