The S&P 500 gave up opening gains a little too easily. The 3,880 did not hold and bonds lost their risk posture. Yields have risen, but the dollar has fallen – and the greenback doesn’t look like it’s out of the woods even though I expect it to top and come back later than July again . Aside from bonds, a good reason why bullish stocks aren’t over yet is the good performance of value (despite the darkening clouds in financials). More immediate stock market thoughts are for premium subscribers only.


(…) Wednesday’s very hot CPI print means the pressure on the Fed to continue to hike aggressively is on. Indeed, no break in inflation, and if the PPI is something to pass (it is), then there’s a lot more in the pipeline – and I’m not talking about that owner equivalent rent, which would continue to push up inflation (it will now be services-oriented rather than goods-oriented). With 50 basis points obviously insufficient to recover some of the Fed’s badly damaged credibility, the question is how much it actually increases. There’s talk of a full 1%, but another 75bp seems most likely to me. And if we see any signs of moderating inflation (gasoline and fuel oil peaked in June, which would help the July numbers, and with inflation expectations now falling, there are strong odds that we will then get 25 basis points in September, and that’s it – halfway through then, justifying the Fed’s wait-and-see attitude.


Granted, economic growth is slowing and we’ll likely get a slightly negative GDP reading in Q2, but given the way GDP is constructed (this setback would be due to inventories and the trade balance), I don’t see the NBER as likely to declare the United States to be in recession. Europe is a whole other story – worst case scenario the Fed fails to make a soft landing, we’re looking at a US recession in early 2023 – regardless of the building housing turmoil, the States are largely isolated from the darkening clouds around the world. I’m looking for a pretty good fourth quarter of S&P 500 gains, but at the same time remember that the current low is a process, and I view the approaching washout (give it about 2 weeks to start) as the worst case scenario. more likely. So take advantage of the positive seasonality of a few good weeks of July still to come.

Let’s get straight to the charts (courtesy of www.stockcharts.com) – today’s full article features 6 good ones.

The S&P 500 is at a crossroads, the fate of which would be decided in the first half of today’s session. I’m looking for a moderate degree of optimism, reducing much of yesterday’s setback. It would be very encouraging if value again outperformed technology. 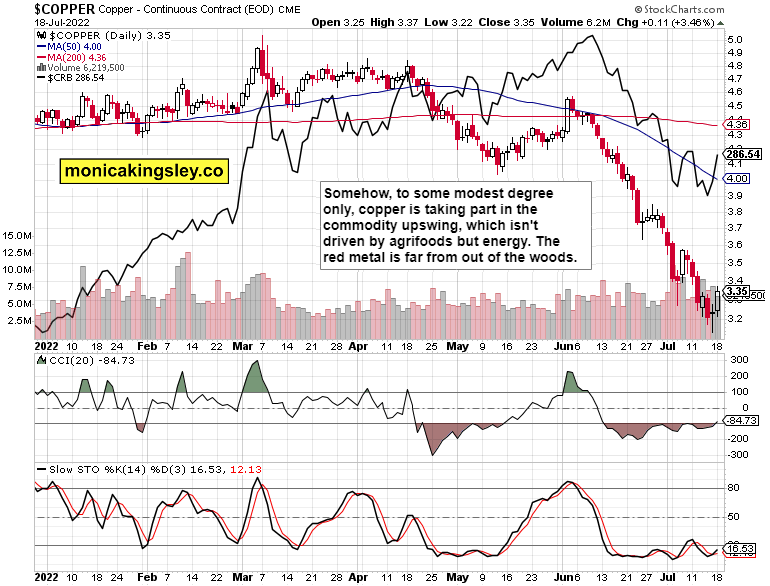 Copper is no surprise on the upside, and it’s no wonder I’m personally waiting for the dust to settle and load the truck on the next wave of capitulation. 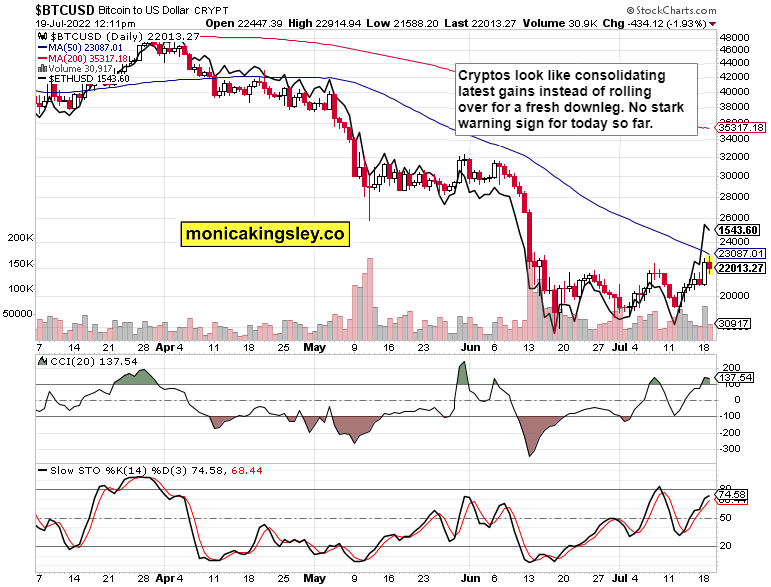 Cryptos don’t look bad at all – we’ll likely see a surge in volume with the downside rejection i.e. indecision today. So far, so good.

Thanks for reading today’s free analysis, which is a small part of Monica’s Trading Signals premium covering all the markets you are used to (stocks, bonds, gold, silver, oil, copper, cryptos), and premium Monica’s Stock Signals featuring only stocks and bonds. Both releases feature real-time trade calls and intraday updates. While you’re on my site, you can join Monica’s Insider Club for free to receive instant post notifications and other useful content to make your own trade moves. Thank you for subscribing and for all of your support that makes this endeavor possible!

1 week ago Stephanie B. Bull

Another Look at the Tinubu Manifesto by Etim Etim